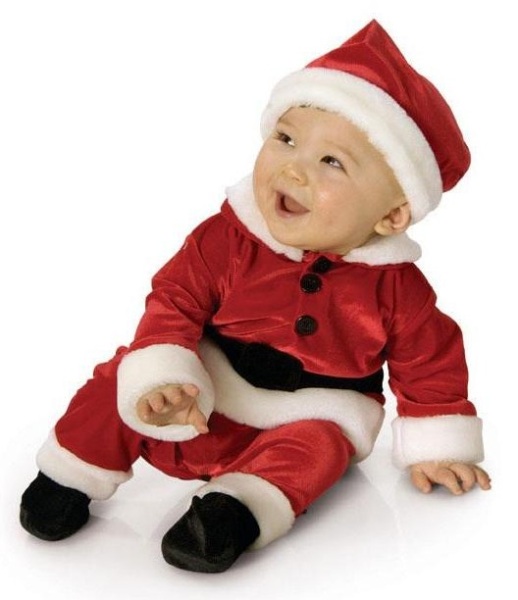 *not an actual picture of my child.

It’s getting to be about that time when I need to have a teaching moment with my son Jackson, who is two and a half. I call him over, and he puts down his tractor and comes running.

Jackson looks at me wide-eyed and stammers for a few seconds before blurting out, “Christmas about… Jesus!”

“That’s right,” I say, patting Jackson on the head and giving my wife a smug nodding smile that says we’re rocking this parenting thing, which she does not reciprocate, because she is not a nitwit. Then I remember the original point of this conversation and I get serious again.

“Hey Jackson, I want to talk to you about Santa Claus.”

“Yes – that’s right,” I concede, and then redirect: “Remember when we saw Santa Claus? At the parade?”

“With FIRE TRUCKS! And HORSES!” he yells.

“Yes – there were fire trucks and horses too,” I nod, “Okay well everyone talks about Santa at Christmas but I want you to know that Santa is actually only pretend, but that Jesus is real.” I say this slowly, making sure he’s following my words.

Jackson gives me a blank look.

Now it’s me who is stammering. “What I mean is, people dress up as Santa and we all have fun with it but it’s all pretend – Santa is not really real.”

“He’s not real?” he says, looking a bit disappointed.

“Nooo… he’s not,” I say glumly, and then looking excited: “but Jesus is! – I want you to remember that. He really did come, as a baby, on Christmas day.”

Jackson seems satisfied with this state of affairs. I’m just about to congratulate myself on a nice recovery when I realize that I’ve led him astray.

“Actually he didn’t come right at Christmas, but Christmas is when we celebrate the fact that he did come, for real, at some point. But we’re not sure when. It was a long time ago.”

I say “Uh, yeah, so Jesus is real and Santa is pretend,” as an attempted conclusion. But then I stop and think for a second and realize that’s not quite true either. “Actually, even though Santa Claus is only pretend, there really was a saint Nicholas who lived a long time ago and gave gifts to children, but he didn’t live in the north pole or have reindeer. He probably did have a beard though. Do you understand?”

Jackson takes a moment to think, then says,

“Santa’s a bit scary. But only pretend scary.”

And with that settled he plods over to play with his dump truck.